What “The Sound of Music” Taught Me About Congregational Song 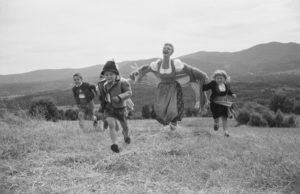 On a recent trip to Ecuador to visit my dear friends Chris and Jenny, I discovered a deeply disturbing fact about their family that shook me to my core: Chris and his two children had never seen The Sound of Music! I’m imagining many of you at your computers gasping and clutching your pearls. I understand; it is shocking! Obviously, as any good friend would, I obtained a digital copy via Amazon and planned for a movie night at their earliest possible convenience.

As you might have experienced, there is both great joy and trepidation involved when introducing people to a classic movie (or really anything) that you love. You revel in sharing something so personally formative with someone else because it helps them know a little more of who you are, but there is also the risk that they will not like it at all—and that can feel oddly personal, like they are also rejecting an important part of you. I also wondered whether this sprawling, sometimes slow, three-hour movie could still interest kids in this faster-paced digital age. Thankfully (and, as usual), my worries were baseless, as the magic of The Sound of Music continues to delight and enthrall.

When it became clear that the kids were enjoying the movie, I turned my full attention back to the beloved and familiar plot. I tried not to sing along too loudly as the story moved from the first “Do-Re-Mi” of the children to Captain Von Trapp’s musical and emotional breakthrough in “Sound of Music” to the gripping apex on the stage of the Salzburg Festival. It was only as the Captain beckoned for the crowd to join him in singing “Edelweiss” (a fictional Austrian national anthem) that a lightbulb went on for me. “Edelweiss” was a perfect example of how context is everything in congregational song. Let me explain.

To refresh your memory, “Edelweiss” is sung twice in the movie version of The Sound of Music. The first time occurs shortly after Captain Von Trapp has reconciled with his family and is in the process of rebuilding his relationship with his children (not to mention stoking a little flame for Fraulein Maria!). After the children’s puppet show, they all decide that the Captain should now sing for them. After a few half-hearted protests, the Captain takes his guitar and sings the folk song with the help of a counter-melody from the oldest daughter Liesl (who clearly has the hots for Christopher Plummer). In this context, the song serves as another sign of the Captain’s conversion, a song of continued healing that works to bring the family closer together.

The next time it is sung, the landscape has shifted dramatically. The Nazis have annexed Austria, and the Captain has been ordered to report for duty to a Nazi naval base. Appalled at the prospect of joining the German regime, the Captain realizes the family’s only hope is to escape to Switzerland. Caught trying to sneak out of their home, the family is forced to improvise a new escape plan that will include slipping out of the city right after their performance at the Salzburg festival. It is as the children leave the stage that the Captain sings one last song: Edelweiss. (apologies for the poor video quality)

Here the song means something completely different than it did only a few scenes earlier. In the context of the festival at this particular time and place, it is a song proclaiming the Captain’s true national identity; it is a song of farewell to the people of his homeland; it is a sorrow song for an occupied country; and, when the Captain motions for the audience to join him, it becomes a song of protest against the Nazis. The same song is sung, but the context in which it is sung fundamentally changes it meaning.

What implications does this have for congregational song? I think it requires worship leaders and worship professors to take context seriously not only when discussing worship style, but also when discussing theological criteria for song selection. Too many times, I have seen classes given the assignment of theologically evaluating a song’s lyrics without taking into account where the song is being sung and who is singing it (confession: as a professor, I have been guilty of this assignment). Sure, there are some songs whose theology will be found wanting across contexts because its lyrics contradict basic Christian teaching, but there are many whose appropriateness will depend largely on context.

To take an historic example, let’s look at the hymn “Onward, Christian Soldiers.” In the 80s and 90s, rivers of ink were spilled arguing for the hymn’s inclusion or exclusion from denominational hymnals because of its militaristic symbolism and language. Those opposed to the hymn argued that comparing God and God’s church to the horrors of war—especially after Somme, Hiroshima, and Vietnam—was an affront to the God of peace and justice. Those who defended the hymn pointed out that battle metaphors were both biblical and apt, since we do war against powers and principalities. What was so rarely discussed was where the song would be sung.

One of the problems about this debate was that it so often assumed normative context: a white, middle-class, suburban mainline church. But this has never been the only context of this song. I was reminded of this at a hymn festival planned by hymnwriter Mel Bringle and tune composer Sally Morris at The Hymn Society in the United States and Canada’s annual conference in Redlands, California a few years ago. As I sat waiting for the festival to begin, I flipped through the program for the night and was both surprised and intrigued to see we would be singing “Onward, Christian Soldiers.” Knowing something about the perspectives of the festival planners, I anticipated that we wouldn’t simply sing the song without some introduction or context setting. And indeed, right before the hymn was to be sung, they showed a clip from the wonderful Civil Rights documentary Eye On the Prize. The excerpt was from a section of the film documenting the Montgomery bus boycotts, and it focused on the nightly services where the people would gather to strengthen their resolve through songs and sermons. As Coretta Scott King explained these services in an interview, the camera panned over the congregation singing—you guessed it—”Onward, Christian Soldiers.”

marching as to war,

with the cross of Jesus

leads against the foe;

Doesn’t it change everything about how the song is interpreted? The war that these Christian soldiers are engaged in, the foe they are up against, is the powers and principalities of systemic racism and oppression. Further, these soldiers were committed to the nonviolent resistance and pacifistic witness of Rev. Dr. Martin Luther King, Jr., ensuring that the metaphor of war never became interpreted literally—even when it could have easily been justified by the violence of their opponents. Even the marching takes on new meaning when we think of the thousands of miles these protestors walked to get to work and church and appointments in lieu of riding the segregated buses.

One of the problems about this debate was that it so often assumed normative context: a white, middle-class, suburban mainline church.

My point is not to reintroduce “Onward, Christian Soldiers” into hymnals, but to help us think with more depth and nuance about the theological criteria we use to evaluate song. With all of the other questions we ask about what the song says about God and humanity, we need to ask additional questions: Who will be singing this song? What is their lived experience, and how does this change the way the song is understood? Where is this song being sung? On what occasion? What is the song doing in the liturgy? Would this song be appropriate in some contexts and inappropriate for others? For those within the dominant culture, it might mean that a song could be inappropriate for your context to sing, but that doesn’t mean it’s inappropriate for all contexts.

This seems to be particularly important (and tricky) in services that will include people from many different ethnicities, classes, traditions, and life experiences. This will require the worship planners to include a diversity of voices in the process to ensure that songs are not only deemed appropriate when they fit the dominant culture’s theological criteria. Perhaps there will need to be more introductions to some of our songs—like Bringle and Morris did so deftly at their festival—to help contextualize them in a particular narrative so that they can be sung together from this new (for some) vantage point.

Songs are never abstract. They are always sung by particular people in particular places for particular purposes. Thankfully, The Sound of Music reminded me why this matters for congregational song. It really is the gift that keeps on giving. So with that: so long, farewell, auf Wiedersehen, goodbye.