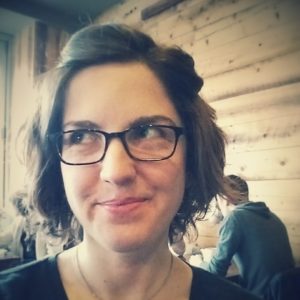 A new PBS documentary highlights songs from the women’s movement. Do any of them work as congregational songs? 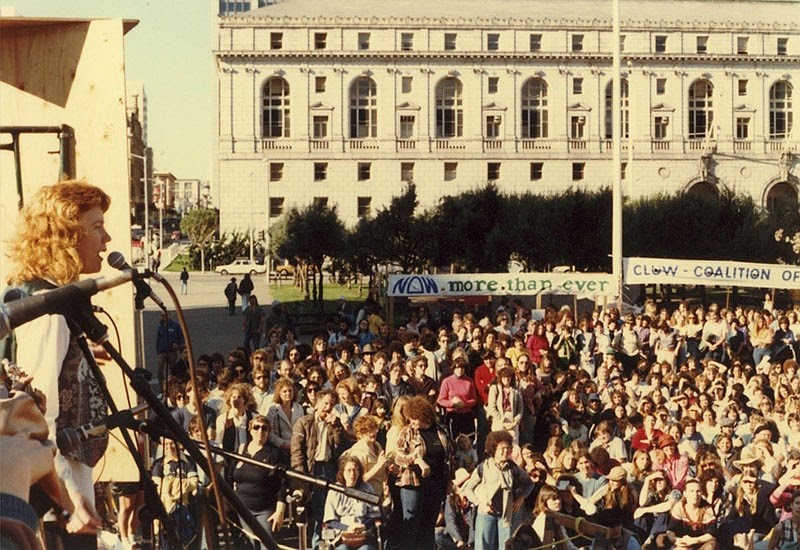 Musician and women’s rights figure Holly Near sings at a rally in San Francisco in the 1970s. Photographer unknown. Photo found at KPBS public radio webpages.

In the month of February we celebrated Black History Month in our churches, homes, and communities. As a leader of congregational song, I love that in February I can immerse myself in music that is written both for and by African Americans. Then March rolls around, and I’m eager to honor Women’s History Month to the same degree, but I find there is much less to choose from. There are plenty of songs written by women, of course. But how many songs are there about the experience of being a woman? What binds the female community in song? What music empowers women, and all people, to effect social change for women?

While these thoughts were swirling in my head in late February, I was delighted to hear about a new documentary from PBS: Rise Up: Songs of the Women’s Movement, broadcasting on local PBS stations in March (a regular donation to your local station also allows you to stream it through PBS Passport, their streaming service). I watched it for pleasure, and enjoyed it immensely. But I also watched it through the lens of a congregational song leader, hopeful that some of the songs would be enjoyable not just to be listened to by the original artist, but to be sung by groups of people. In this case, the groups of people I’m thinking of are not worshipping bodies (none of the songs from the documentary were explicitly faith-based), but groups who are gathering to strengthen each other to seek justice for women. This could be a rally, or a group meeting, or just a social gathering, whether it is at a church or not.

Rise Up takes viewers from the time of women’s suffrage to the present day, but most of the music is from the modern women’s movement, about 1963-1985. The first song it mentions in this time period is “You Don’t Own Me,” (1963) by Lesley Gore.

This is a song I’ve loved from my own childhood, tuning my little red radio to the oldies station in my bedroom. (Yes, I was that kid who preferred the music of my parents’ generation to that of my own.) As I watched Rise Up, I enjoyed listening to the song from the perspective of Lesley Gore herself, who was only 17 when she topped the charts with it in 1963. How empowering it must have been for teenage girls in the 1960s to hear someone their own age say that being yourself is enough!

You may also recall that this song was resurrected thirty years later in the movie The First Wives Club (1996), in a memorable scene:

Watching Bette Midler, Goldie Hawn, and Diane Keaton sing and dance, you can sense how powerful this song has been in binding groups of women together. As a congregational song leader, though, I have two critiques. First, as I watch the First Wives segment, it makes me wish the words were collective:  “You don’t own us. Don’t tell us what to say. Just let us be ourselves!” When women free themselves from what men want of them, it is not then every woman for herself, but all women together.  We have joined a sisterhood that is as loving and supportive as what the protagonists from First Wives clearly enjoy. Second, I wish the song was easier to sing a capella. There’s a key change in the middle of the chorus every time, then back to the original key for each verse. This is something that can be difficult to do without backup instruments. All the same, I can see this song receiving another resurrection for the teenage girls and women of the 21st century. (In fact, it has: Kristin Chenoweth and Ariana Grande covered it in 2019.)

One song I hadn’t heard before watching this documentary was “I am Woman,” (1972) written and performed by Helen Reddy.

When asked about her song in a 2003 interview, Reddy said,

“I couldn’t find any songs that said what I thought being woman was about. I thought about all these strong women in my family who had gotten through the Depression and world wars and drunken, abusive husbands. But there was nothing in music that reflected that.”

Her words echoed my own thoughts on the subject.  I love that Reddy performs on stage with a simple, short haircut and minimal makeup. And, man, “I am Woman” is catchy! It makes you step out of your car feeling like you can take on the world! I’m smiling to myself as I imagine women driving to work, belting out this song in their cars, or gathering together in living rooms, singing it together with the recording. It’s easy to sing even if you don’t have Helen Reddy’s recorded voice backing you up.

When I put on my congregational song leader hat, though, and I notice again that the lyrics are individual and not collective. I want people who are singing a song of liberation to feel that they are not just being extracted from oppression, but that they are being pulled out by a loving community. I want them to feel caught into the arms of people who know their pain, who can then be their friends and partners as they start new lives. Reddy sings, “I am woman, hear me roar!” but, in my own experience, I find that roar loses energy if I’m roaring alone.

In a documentary full of great songs, the one that left the best impression on me, from a congregational song perspective, was Holly Near’s “Fight Back,” written in 1985. Unlike the two songs mentioned above, “Fight Back” was never a chart topper. But, as you’ll hear in the live YouTube clip, Near sings it backed only by hand drums, with attendees from the Michigan Womyn’s Womyn’s Festival singing along with her.

The African American Civil Rights movements had songs like “We Shall Overcome,” songs that were easy to sing while you linked arms with others, marching down the street filled with hope, energy, and maybe a bit of righteous anger. The lyrics of “Fight Back” are fantastic for a protest setting:

By day I live in terror

By night I live in fright

For as long as I can remember

A lady don’t go out alone at night.

But I don’t accept the verdict

It’s a wrong one anyway

˜Cause nowadays a woman

Can’t even go out in the middle of the day.

And so we’ve got to fight back

Fight back, I can’t make it alone

Fight back, in large numbers

Not only is the song upbeat and catchy, the words are focused on all of us working together to defeat injustice. There is some use of the word ‘I,’ but for the purpose of tying our individual experiences together, to realize we are not alone in our fear and pain. “Together, together we can make a safe home!” Near says. “I can’t make it alone.”

In the second verse, she goes on to say that staying behind locked doors is some people’s solution, but one she refuses to accept. She won’t be afraid; she refuses to live in fear when the whole world is filled with women like herself.

Women all around the world

Every color, religion and age

One thing we’ve got in common

We can all be battered and raped

Some have an easy answer

They buy a lock and they live in a cage

But my fear is turning to anger

And my anger’s turning to rage

If you, like me, were looking for a protest song about women’s rights, written by women for women, that you can sing with little to no instrumental help, this is your song!

A running theme through Rise Up, expressed by big names like Melissa Etheridge, Gloria Steinem, and others, is that the women’s movement owed much of its success to the music. To paraphrase Etheridge and Steinem: “Music bypasses the mind and goes straight to the heart.” It was encouraging to hear celebrities speak the truth that I try to live out in my work every day.

I’m interested to hear if anyone else watched Rise Up. What did you think? And what about songs for the women’s movement? Are there any good ones that they left out?

One thought on “Rise Up: Songs of the Women’s Movement”