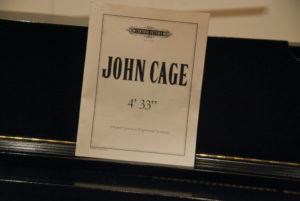 Author – Brian Hehn is the Director of The Center for Congregational Song and not an expert in silence…but here we go!

How much silence is incorporated into your weekly worship services? In a world defined by continuous sound we are increasingly deprived of silence, and questions are arising about the spiritual implications this has on Christians today. A few years ago, I was serving a United Methodist Congregation in North Dallas and was bothered by the lack of intentional silence we incorporated. If there was silence, it was usually a mistake or was considered awkward by both the leadership and congregation. In a service with no silence, where is the opportunity for us to listen to God together? Where is the opportunity for people to explore their innermost confessions and desires with God without being told what to think, pray, sing, or do?

So I had a crazy idea. You know that piece that all music majors learn about by John Cage? Yeah, the one that is all rests. It’s called 4’33” because the piece is designed to last 4’33” and calls for the performers to not intentionally play any musical sounds. Of course, Cage had many reasons for writing such a ridiculous piece of what most people would consider not music. There are many hilarious articles and reactions to the piece, which you can read about here. Ok, so you know that piece? We’re going to do it as a congregational song.

I had to pitch the idea to the pastor. It’s unwise to do risky liturgical ideas without full support from the staff and your boss. He was skeptical of the idea, but I had spent two years with Pastor Jack and he knew he could trust me and that the congregation trusted me. So he ok’d the idea.

What would God do? I had no idea.

I had to place the song in the liturgy. In our service, we incorporated a time of confession near the beginning of the service. Sometimes that time was a confession as in “I believe,” and sometimes it was used as a confession as in “I confess.” That time was followed by the scripture readings for the day. This seemed like the perfect time, but we needed a transition into the scripture readings…something to mark the end of the 4’33”. I came across a choral anthem which was a setting of “Come and Find the Quiet Center” by Shirley Murray. Even better, the last stanza had an opportunity for the congregation to join in. To see that anthem, you can click here.

I had to prepare the choir. Don’t underestimate this step when doing something “out-of-the-box” at your church. Your choir can be your best advocate. Use some rehearsal time to explain to them what’s going to happen and why it’s going to happen. Let them ask questions and have reactions. Use that time to teach and encourage them to have equally open conversations with congregation members when they leave church that day. Empower them to help education and shepherd the congregation. Not only does this encourage their own ministry in music, it also helps keep your job secure!

I had to figure out how to lead the song. I decided that the best way to lead the song would be to display the score on our screen, give a downbeat to the congregation, start the timer, and sit down. At the stroke of 4’33”, I would give the downbeat to the pianist which would cue the choir to stand. No explanations needed…in fact, I think if I explained it, then it would have killed the moment.

Do it! Was I nervous? Yes. Was I excited? Yes. What would happen? What would the people do? What would God do? I had no idea. So I lead the song as planned. The score came up on the screen. I gave a downbeat, started my stopwatch, and sat down.

Minute 2 – almost total silence with still a bit of shuffling.

Minute 3 – total quiet. The air conditioning starts up. A car honks its horn in the intersection nearby.

Anthem begins – The choir begins its anthem, and I could hear the shuffling of feet and bodies in the pews. I turned around for the last stanza (melody & words in the bulletin) and invited the congregation into the song…

“In the Spirit let us travel,

open to each other’s pain,

let our loves and fears unravel,

celebrate the space we gain:

there’s a place for deepest dreaming,

there’s a time for heart to care,

in the Spirit’s lively scheming

there is always room to spare!”

So what was the result? What did people experience? How did they react?

A few people didn’t like it, and they told me that it was “weird” or that they “didn’t understand why we would waste 4 minutes just sitting.” And a few people were weeping. They wept for reasons that I will never know. One first-time visitor to the church told Pastor Jack after the service that, “although she didn’t know it, the hymn of silence was exactly what I needed. Thank you.”

For other blogs from The Center for Congregational Song, go to: https://congregationalsong.org/conversations/blog-connections/

3 thoughts on “A Profound Silence”