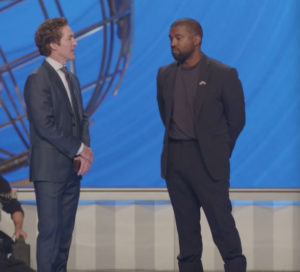 We weren’t going to post anything about Kanye West and his new album. Frankly, he gets enough press already and most of his music isn’t designed nor does it lend itself well to be considered “congregational.” But the latest news of him claiming to be the “greatest artist God has ever created” does open up an opportunity to explore that claim and learn about some church music history.

So here’s a list of 10 artists who Kanye obviously doesn’t know about that we think are worth mentioning when discussing the “greatest artist God has ever created.”

Often called “The Father of Western Hymnody,” Saint Ambrose of Milan was a key figure in solidifying the idea that Christ was not a creation of God, but rather a full part of God from and of the beginning. Can many other artists in our history or today claim that they literally shaped and then defended a key tenant of the Christian faith? Check out one of his hymns we still sing today, “O Splendor of God’s Glory Bright.”

Given credit for founding scientific natural history in Germany, this 12th century nun is also one of the most well-known Pre-Reformation sacred composers. Just listen to this stunning performance of one of her chant arrangements.

You know the branch of Christianity called “Reformed” and “Presbyterian”? Well, the music that they sing was and is largely influenced by Louis Bourgeois who was largely responsible for the milestone “Genevan Psalter” in the 16th century. Most famously he’s credited with composing the tune OLD HUNDRETH, which is sung by countless congregations each and every Sunday. Here’s a great a cappella singing of the tune from a recent worship conference:

It’s hard to find a composer who more carefully and skillfully combines music and theology than J.S. Bach. Organ, Orchestra, Voice…you name it. So many of his compositions are considered masterworks and are performed across the world each year by multiple ensembles that we don’t know where to begin. So here’s a playlist of the “best of Bach” for your listening pleasure.

While much of Handel’s music is unremarkable when it comes to the “greatest” conversation, his oratorio Messiah has been continually sung/performed for over 270 years and counting. In 2014/2015, 13 of the 22 largest American orchestras performed the work 38 times. When people think church music, they think Messiah. Here’s a full performance:

Also, how can we mention Messiah and not also link to the “Soulful Celebration” remake from 1992?

A blind woman living in the late 1800s, she wrote more than 8000 hymns and gospel songs and over 1000 secular poems. Her most popular hymn, “Blessed Assurance,” has appeared in over 900 hymnals and continues to be sung today. We were going to mention Charles Wesley, but we couldn’t leave out Ms. Crosby who wrote more hymns than he did!

Here’s another setting of Crosby’s hymn from the black gospel tradition:

The grandson of a partially blind ex-slave, Harry T. Burleigh did arguably more than anyone else in history to preserve and advance the music of Black Americans. For an introduction to his life and legacy, you can click here.

One of the greatest and most influential jazz musicians, Sir Duke was not only a jazzer but a dedicated christian. His concerts of sacred music were a unique cross-over that paved the way for the church and the secular music industry to meet and influence each other.

After her recent death, if you weren’t aware of the life and legacy of Aretha Franklin, you should be now. Her iconic album “Amazing Grace” was a game-changer for sacred music.

If you listen to Kanye’s new album and you’re familiar with the history of church music, and specifically black sacred music, you’ll hear a lot of influences in there. In fact, it’s hard to hear very much that is new at all. In particular, Kirk Franklin was paving the way for much of what you hear on Kanye’s album. If you’re not familiar with Franklin’s work, one of his most well known early albums is “Hero”:

Finally, this list is in no ways official or comprehensive. In fact, it’s very particular to a European and then white & black American history of church music. Other than Kirk Franklin we didn’t even mention any other music contemporaries like Marcos Witt of CanZion Productions whose music and educational ministries have reached Spanish-speaking Christians across the world with numbers in the millions (thanks for this tip, Adam Perez), or Shirley Erena Murray whose hymn texts are at the cutting edge of ecotheology, 21st century Christology that is in concert with scientific thought, and expressing non-western Christian worldviews. Our list is also hyper focused on music instead of art as a whole (remember the claim was on being the greatest “artist”). And, or course, there’s also the question of what the definition of a “great” Christian artist is, which most people would have to agree has to have different metrics than what the popular music industry gives us.

So, in short, no. Kanye is certainly not the “greatest artist God has ever created.” Seriously? Is there even such a thing? Probably not. We’re all made unique and are given a particular calling by God, not to mention there have been some seriously talented artists in the past and will continue to be in the future. Maybe a more accurate claim would be that Kanye is the greatest Prosperity Gospel Christian Rap/Hip-Hop Artist God has ever made who gave his life to Christ in the early 21st century. That’s probably true.

Author Brian Hehn is the director of The Center for Congregational Song.