Author – Ginny Chilton Maxwell is Music Minister at Church of the Ascension in Norfolk, Virginia, where she serves as organist, choirmaster, and elementary music teacher.

One of my choir members was telling me the other day that every time she hears “Be Thou My Vision,” she can picture the outdoor chapel where she worshipped at sleepaway camp as a child. She can feel the miniature Episcopal hymnbook in her hands and see the faces of the two women–sisters– who ran the camp. I was struck by the image of her as a child and the power of the music, combined with the setting, to make such an impression on her (this took place over 50 years ago!). It made me ponder how important it is that we all take some sabbath time to refresh ourselves, and how singing and summertime naturally lend themselves so well to that refreshment.

My choir member called it “sleepaway camp” but I just called it “camp” when I was a kid. The only camp I ever attended as a child was St. George’s Camp, at Shrine Mont in the Shenandoah Valley. I think my favorite part of camp was the worship services, which were held twice a day, and the best part of that was the singing. We sang all the music by heart and had hand motions for nearly every song. There are so many things that you share at camp, but sharing song is so powerful because it engages all of yourself: your voice, your body (especially if there are fun motions!), your sense of hearing, sight, and touch. It was something you could share with the other people at camp, something you could look around and feel you had in common with folks who were strangers just a few days ago.

I was a “St. G’s” camper over 25 years ago, but when I hear those songs I can still feel the friendship bracelets on my wrist and taste the grape soda like it was yesterday. I’m trying to think what else but music would conjure up such vivid memories. Looking at a photograph or touching an old t-shirt can certainly send a wave of memories crashing down on someone, but I think music has a special ability to help us recall the past in such detail.

St. G’s was so important to my sense of sabbath as a child. I came home with a cassette tape which I played on repeat after a tough day at school, in an 8-year-old’s version of what I would now call self-care. I looked forward to that week (just one week!) away every summer to clear my mind. It restored my self-confidence and put the stress I experienced during the school year into perspective. And I cried my little heart out to say goodbye to all my new friends, friends I’d only known for a week! I think music–specifically, singing together– had something to do with how close we were all able to grow in such a short amount of time, how renewed I felt, and how vividly I can recall these memories some 25 years later.

She can feel the miniature Episcopal hymnbook in her hands and see the faces of the two women–sisters– who ran the camp.

I no longer fit the age requirements for St. George’s Camp, but my need for a summer singing sabbath is as important as ever. The Hymn Society’s annual conference is one place I’ve found to refresh myself through singing in the summer. No counselors or bunk beds at this sleepaway camp, but you can often stay in a dorm with a roommate! My first annual conference was in 2012 in Winnipeg, Manitoba. I had never been to that part of Canada before, and I was struck by the vast expanses of prairie stretching out all around us as we rode the buses to and from the university for our evening hymn sings. So different from the east coast! The evening that sticks out in my mind the most was a hymn sing we did at a little Anglican church with a BIG organ. It was the first time I’d been introduced to the music of Thomas Pavlechko, who accompanied the hymn sing and played several of his hymn tunes and harmonizations. We had enough people there to fill nearly every seat in the church. I remember at one point I felt totally transported; everyone was singing with all their might, and our voices, woven together with the organ, filled every bit of aural space in the sanctuary. I got teary-eyed, and at the end, with uncharacteristic exuberance, I rushed up to have my picture taken with Mr. Pavlechko. I came home feeling refreshed, with a renewed passion for organ music and congregational singing. It was not just the music, but the fact that I could participate in it, and join my voice with so many others, that made this such a moving and refreshing experience for me.

I know there are many of us who read this blog who have had a similar experience at a Hymn Society annual conference. What year stands out in your mind? What about summers from your childhood, or the summers your own children are experiencing now? Are there summer camp experiences that set the precedent for your love of congregational song? What are you guys doing to refresh yourselves this summer?

…but when I hear those songs I can still feel the friendship bracelets on my wrist and taste the grape soda like it was yesterday. 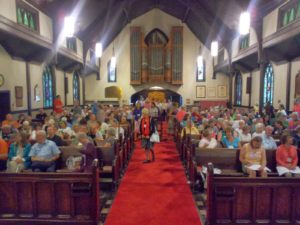 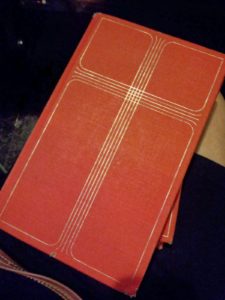 “She can feel the miniature Episcopal hymnbook in her hands…” 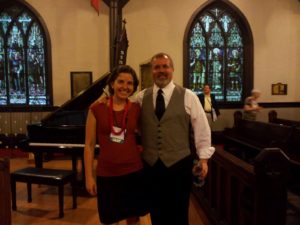 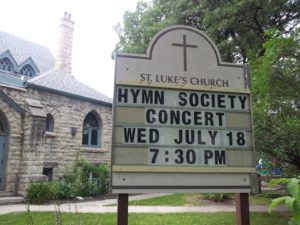 The beautiful church where Thom Pavlechko’s hymn festival was held in Winnipeg, Manitoba. 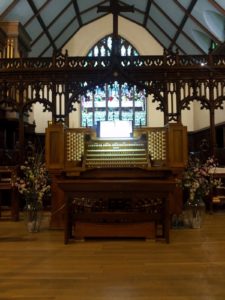 The organ played for The Hymn Society’s hymn festival that evening in Winnipeg, Manitoba.