Author – Brian Hehn is the director of The Center for Congregational Song.

Although not verified through any written text, it is common for hymnologists and church musicians to quote the 20th century hymnological giant Eric Routley as saying that church musicians are “denominationally promiscuous.” I must confess that I fall into that category. Raised in South Georgia, my father was a former Roman Catholic and my mother a former Southern Baptist. So when it was time to raise us in a church family, they found a liturgical compromise by attending a Presbyterian Church (USA) congregation with solid children’s and youth programs. Upon entering college, I found myself attending and eventually serving as a music intern for a Cooperative Baptist church. After four years there, I entered a United Methodist School of Theology and served United Methodist Churches as director of music for over seven years. Finally, my last two posts as associate director of music have been in a suburban Roman Catholic parish followed by a Roman Catholic Cathedral, where I currently serve. I should mention there was a 1-year period in there when I attended an ELCA Lutheran congregation with my family on Sunday mornings when my primary leadership role was for Sunday afternoon Catholic masses. While serving churches as a church musician has always been a part of my professional life, the other part has consisted of serving ecumenical non-profits and doing conferences/workshops for a variety of churches and organizations.

After working for and worshiping with so many different denominations, I have often asked myself questions like, “wouldn’t it be better to work for the denomination I actually resonate most closely with?” and “is it authentic for me to lead worship in a denomination with which I have some clear-cut theological and/or social disagreements?” These are important questions. But, for me, there’s just nowhere to serve that wouldn’t put me in the same position I’ve been at in every church/denomination I’ve served so far. Every denomination and/or tradition gets some things right and gets some things wrong. Every denomination and church has members that are closer to sinner and closer to saint at any given time. But what I have found in every context so far is that every denomination is full of clergy who have given their lives to try and lead God’s people, every church has staff who are trying their best to lead worship in spirit and in truth, and every worship service has congregants who are trying their best to find the Holy somewhere in this world and in themselves.

I’m grateful for my ecumenical journey, and I’ve learned a lot about my faith and the church universal by spending time with those who think and worship differently than I do. So here are the top three things I’ve learned from each denomination/church I’ve served so far, and the one thing I wish I could tell them. 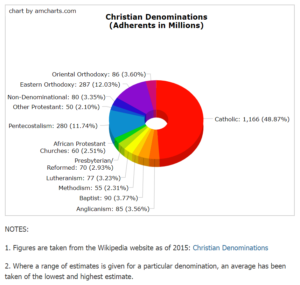 People often ask me where I see the future of congregational singing going.

*This chart taken from: https://en.wikipedia.org/wiki/Christian_population_growth

The Future of Congregational Singing

People often ask me where I see the future of congregational singing going. Like the general world-wide trend of Christian denominations and the general population trend of the U.S., I think that we are shifting (or possibly have already shifted) away from a culture of majorities to a culture of pluralities. There won’t be songs that we can identify that the majority of Christians sing. There won’t be genres that the majority of Christians sing. There will be many identifiable trends that are equally interesting, useful, problematic, and complex within the church’s song. And, to me, that means we’re getting that much closer to singing what God sounds like: an intermingling of different pitches, rhythms, and timbres from all times and places that create something beautiful and unexpected.

A future post will deal with the pedagogical implications of working in the church when pluralities are realities.