Album Review – The Meek Squad, I Am For You: Songs of Prayer and Peace 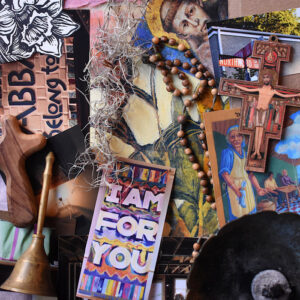 Within the first 30 seconds of this album, my attention was completely arrested. Although the first track is a simple, brief chorus, I heard a voice I have never heard represented in a recording of songs for congregations to sing—it was deeply moving. The voice I heard was Sloan Meek’s, whose name is the source of the band’s moniker. The Meek Squad consists of Sloan, Suvya Carroll, and Lee Anderson; three friends who love to sing together. They all live in the North Street neighborhood of Durham, NC, part of a community supported by Reality Ministries, whose mission is to “create opportunities for adults with and without developmental disabilities to experience belonging, kinship, and the life-changing reality of Christ’s love.” Sloan Meek and Suvya Carroll both have cerebral palsy. Sloan also has spastic quadriplegia and cortical blindness—but none of that hinders the joy in Sloan’s voice as he sings, which is what captivated me. This album was begun in 2019 and released in March of 2020.

The songs on this album are built around Lee Anderson’s acoustic guitar and folksy tenor voice, with other instruments (bass guitar, pads, organ, electric guitar, percussion instruments) layered in for subtle dynamics. Musically, these songs would be relatively easy for congregations of any size to adapt to their context. Carroll and Meek and a chorus of other voices pervade the songs, making it clear that this album is intended to be sung and has emerged from a context where these songs are often used. Melodies are clear and repeated often enough that songs could be learned quickly.

Lyrically, the songs draw liberally from the Gospels and the Psalms, accomplishing exactly what the album’s subtitle indicates—songs that are sung prayers and songs that remind of the peace we have with God through the promises God has made. Just as the melodies are clear and easy to follow, the lyrics are clear and easy to follow as they are repeated often in the chorus-style of the songs. Several songs contain only 4 lines of text, but none of the songs felt ‘repetitive’ as dynamics and added voices help each repeat stay engaging.

Notable songs include: “I Am For You” (the title track), “Teach Us How to Pray” (a chorus that could lead directly into corporate recitation of the Lord’s Prayer), and “Trust in You” (a song that simultaneously is prayer and a source of peace).

If your congregation includes any folks with cerebral palsy or other significant disabilities, I cannot overstate how meaningful this album may be. If your congregation does NOT include any folks with disabilities, I would still encourage you to listen and be reminded that God is pleased by the diverse voices of every one of God’s children. May every church be an encouraging space for the voices of the disabled, and may this album be a resource to stir music leaders to include leaders and voices of all types, who demonstrate hearts of worship.