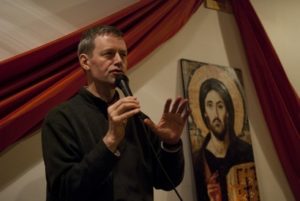 This episode is with Taize Brother Jean Marie, who is one of the community’s lead musicians. The Taizé Community is an ecumenical Christian monastic fraternity in Taizé, Saône-et-Loire, Burgundy, France. It is composed of more than one hundred brothers, from Catholic and Protestant traditions, who originate from about thirty countries across the world. It was founded in 1940 by Brother Roger Schütz, a Reformed Protestant. The community has become one of the world’s most important sites of Christian pilgrimage, with a focus on youth. Over 100,000 young people from around the world make pilgrimages to Taizé each year for prayer, Bible study, sharing, and communal work. Through the community’s ecumenical outlook, they are encouraged to live in the spirit of kindness, simplicity and reconciliation.

In this interview with Brother Jean Marie of the Taize Community, host Ben Brody explores what it means to pray in song. Insights into how the Taize Community writer their own songs as well as choose the songs they sing in their services. What does it mean to pray? What does it mean to live in community? How does a song find its way into a community?

I grew up with the idea that Christianity is relevant. It involves young people. It was vibrant.

There are always new discoveries.

Jacques Berthier was a very special person. He was a musician from head to toe. It was not easy to find a way to continue [Taize’s music] after his death.

It was a living tradition that was carried lightly.

People are trying to meet the challenges of today…of singing and enlivening congregational singing in contemporary communities.