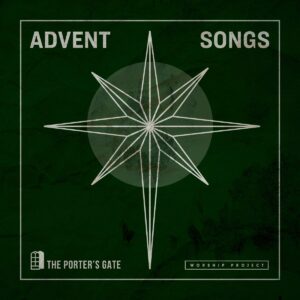 The Porter’s Gate collective of songwriters is frequently mentioned by the Sing! Blog team, for reasons made evident in work like their recent release, Advent Songs. Just as the Sing! team seeks to be ecumenical and diverse, The Porter’s Gate team cherishes and cultivates a diverse songwriting cohort for each record released. Although Advent Songs is recorded by various artists/songwriters, the production led by Isaac Wardell brings a cohesive, reflective mood to the anticipation of Jesus’ birth and imminent return. Just as in previous Porter’s Gate releases, this album contains songs that are simple in their arrangement yet beautifully performed by artists such as Paul Zach, Liz Vice, Page CXVI, and Lauren Plank Goans.

Overall, this album may be more reflective than participative among the other Porter’s Gate releases (as a side note, consider “Drive Out the Darkness” and “How Long?” from Lament Songs in your Advent planning, too). Piano and acoustic guitar continue to be the foundational instruments for songs, with very clear and strong melodies leading each song, but this album has an intimacy unique to the themes of Advent. For example, you may not be able to find many Advent albums with a lullaby from the perspective of Mary (mesmerizingly performed by Liz Vice).

Musically, this album has a deceptive simplicity. There are many layers (strings, pads, ambience, reverb) that provide part of the mood, and these elements aren’t always reproducible in local church contexts. The oboe that weaves in and out of a couple songs is also an instrument one may be hard-pressed to find in a local church. That said, the available score/charts for these songs illustrate the strength of the melodies and lyrics that may be arranged for smaller contexts.

Lyrically, all of the typical Advent themes are woven into these songs, with a slight edge to Love over Hope, Peace, and Joy. Biblical language shapes every phrase, drawn liberally from both Old Testament prophecy and psalter as well as gospel accounts from the New Testament. I highly recommend reading the lyrics/charts while listening to receive the full weighty effect. The various lyricists of The Porter’s Gate have crafted memorable, poetic hymns.

Notable songs for congregational use include “Make a Way” with its gospel/blues groove, the rearranged hymn “In a Land by Death O’ershadowed,” and the new hymn “The Reign of Mercy.”

Notable songs for reflection include the aforementioned “Mary’s Lullaby,” and the minor-key invocation “Isaiah (O Come).” Both of those songs left a lingering, somber mood in their wake.

This album is a welcome addition to any Christmas/Advent playlist. If you have a reflective or intimate Advent gathering in your liturgical calendar, many of these songs may be very appropriate. In some ways, this album stands in contrast to the bright, flashy, commercial fare readily available on the radio by subtly, softly declaring a different way of being brought about by the birth of Jesus, our Messiah. This Advent record rightly remembers the incarnation and looks forward to the soon-coming return, concerned with a deeper joy and contentment than mere holiday cheer.