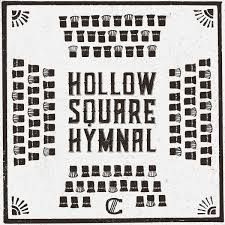 Cardiphonia is a collaboration of artists and musicians who give their first fruits to the church.  Bruce Benedict, Chaplain of Worship and Arts at Hope College is the founder and director for Cardiphonia, and thus responsible for curating the artists who participate on each record. “Hollow Square Hymnal” was released in 2016 and is one of 9 full-length albums released by Cardiphonia. This particular album consists of hymns that have their origin in shape-note singing. For those unfamiliar, shape-note singing was developed in the 18th century in order to help “un-lettered” folks in congregations to sing. The “hollow square” refers to the standing arrangement of singers—the song leader stands in the middle with the four parts set up in a square. Newcomers were encouraged to stand in the middle of the hollow square to experience the richness of voices raised in song. All of the re-arranged hymns included on “Hollow Square Hymnal” are inspired by this era, but they have been reinterpreted in indie/folk fashion for this collection.

This album contains 22 different tracks from a diverse selection of artists including Bruce Benedict, Wen & Casey Reagan, Daniel Justice Snoke, Pillar Church, Wendell Kimbrough, and a dozen more. Musically, each song captures the Sacred Harp hymnal tradition in melodic movement, often evoking a haunting quality. Instrumentation is very Americana or rootsy, with jangly banjoes, guitars, fiddle, and upright bass playing prominently. Piano and organ appear a few times as well. Vocals rightly take the place of prominence in these songs, with alternating soft harmonies, cries of praise, and soulful laments (with several songs in a minor key). Each vocalist brings their own timbre to their respective song, but there is unity in the diversity such that the album feels very cohesive. Lyrically, the hymn texts stand the test of time by both connecting to centuries-old articulation of faith and giving voice to current struggles and sufferings. Shape-note singing has experienced a revival in recent years because of the songs’ ability to anchor singers in lived experiences of the Christian life, which include suffering and longing.

Notable songs include “Praise the Savior” by The Green Carpet Players, which is mixed in such a way that the listener may feel as if they are indeed in the center of the hollow square. “Wonderous Love” and “Come Ye Sinners” are recognizable hymns that have been given fresh and vivid interpretations. Each artist gives respect to the melody while framing and ornamenting the hymn in their own creative way.

The ministry of Cardiphonia is a valuable resource for singing in the local church, and this particular album gives voice to an important genre of congregational song in relatively recent church history. Whether aware of it or not, many of us sing songs from the shape-note tradition, and this album illustrates that there are many more gems to be mined from the Sacred Harp hymnal and shape-note sources. For any churches who already sing some of these songs, this album will give fresh interpretation to the tried-and-true melodies.